Archaeology for Everyone! Children’s Archaeology Study Days around the ancient Georgian capital, Mtskheta 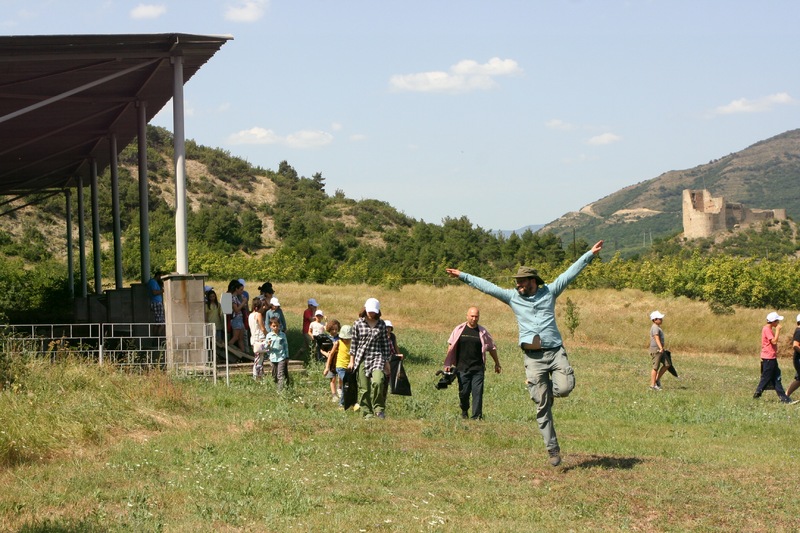 Leading the children up the hill at Samtavro...

At a meeting Emma Loosley and I had with Davit Lordkipanidze, General Director of the Georgian National Museums, in May 2017, the idea of having educational events for children utilising the archaeological and other resources of the Georgian National Museums were raised. It is the Director’s long-held dream to have residential archaeological camps. These were initially discussed in relation to the projected museum and archaeological research centre planned for Dmanisi, Kvemo Kartli region and also to use the 52 hectare Giorgi Chiataia Open Air Museum of Ethnography within the Tbilisi city limits. A further proposal from the General Director was that another location could be the new research centre built at Armazi, just outside Mtskheta, c.20km north-west of Tbilisi. Using this as a base, he suggested that the Museum’s archaeological reserves of the Roman city/town of Dzalisa and the Samtavro cemetery could be used. His thought was that the sites be used to make the children aware of a number of archaeological questions, to prepare some of them to become the scientists of the future.

Site visits made it clear that the reserve locations were suitable, but that the new building in Armazi was not yet complete as the building still lacked kitchen facilities and furniture. Within the timeframe imposed by the University of Exeter’s funding, namely that all spending be achieved by the end of July 2017, this meant that the residential aspect was not possible to achieve. Instead, the offer was made by us that there be two one-day field-trip events as a pilot for such future programmes. This was agreed and Mikheil Tsereteli, Deputy Director of the Georgian National Museum and Darejan Dzotsenidze, Head of the Education Dept of the GNM, and her team worked with Emma and myself on these field-trips.

In connection with this, we prepared a guide for the itinerary, which could be used not only by GNM staff, but also for schoolteachers. The document covered an introduction to Dzalisa and in particular its mosaics, baths and swimming pool; an introduction to the archaeology of buildings using Tsilkani church and Antiokia church in Mtskheta and an introduction to the multi-period Samtavro cemetery site in Mtskheta. This latter section included the various different methods of burial used at this site and in the vicinity, such as the akeldama (tomb) found near Mtskheta railway station and others of its like found at Tsilkani and Dzalisa. 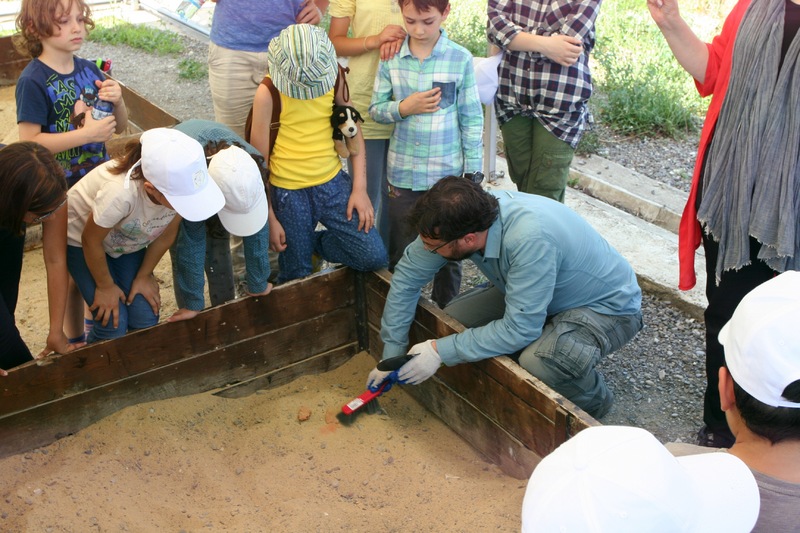 Learning how to excavate

The two days chosen were Thursday 20th July and Wednesday 26th July. The form of the event was conventional, and would have been familiar in a British setting, in that the children were led around parts of the monuments and guided as to what they were looking at. Questions were encouraged throughout. Antiokia was chosen, as this was an appropriate point for the children to hear the story of the foundation of the Kingdom of Kartli from the medieval compendium of texts called Kartlis Tskhovroba (literally the Life of Kartli). At Samtavro we took advantage of the facilities on site, where there are five modern cists filled with sand. We inserted broken pottery into these and each child had one set of pottery to excavate, using equipment purchased by the University of Exeter (this included a trowel, dustpan and brush, a small bucket and a pair of gloves for each child). Once the children had discovered all of the pottery (a tally of number of pieces was kept to check this by) they were then instructed to attempt to reassemble the items. Some of the pottery items were deliberately incomplete, to teach the lesson that complete vessels are not always discovered. After completing this task, they were then asked to draw their pottery or anything that had inspired them on the day, again using materials provided by the University of Exeter.

After a meal, the children were presented with a specially printed baseball cap and T-shirt, with the logo “არქეოლოგია ყველასათვის” (Archaeology for all/everyone in Georgian) and a certificate. After the success of the first field trip, we were told that the event had been so successful that there were enough on the waiting list to make up a third such event. Since there was room in the budget, it was agreed that a third day could be included on Friday 28th July, however, children on the third day had to have more limited supplies as there was no additional budget (or time) to have more items of clothing printed.

56 children attended over the course of the three days. The GNM has reported that almost all of the parents (or the children) have been very enthusiastic and contacted the Museum to say that they thoroughly enjoyed it. On the second day we found that two of the first day’s participants had enjoyed it so much they came back to do it again. We were careful that this didn’t happen with the third day’s roster. In particular, the timing of the events, in the hot summer months, was seen as beneficial, as the former mass exodus of children out to the countryside from Tbilisi is now financially unviable for many families.The methods used in these events were ones which Emma Loosley and myself have experience from our previous work in the very different environments of Syria and northern Britain respectively. 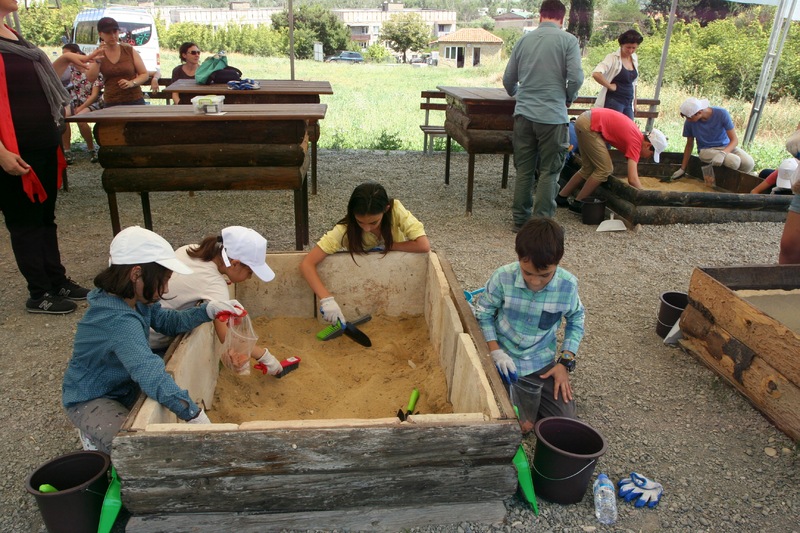 Especial thanks must be given to those who look after the sites of Dzalisa and Samtavro for their help, and to the young members of the GNM who also came to help and were encouraged to deliver parts of the field trip themselves, with great success.

The equipment purchased for this pilot is sufficient for a group of 20 children to participate in excavation work. The above-mentioned equipment was supplemented with two 30m measuring tapes, a first aid kit and three large plastic storage boxes with lids were purchased to store all of the equipment. Seating mats were also provided, as it was intended that the children could sit and eat their lunch at Antiokia. However, the monastery now on that site forbade both activities, making an alternative site for lunchtime a strong suggestion for future versions of these field trips. This is a pity, as one of the events was attended by the daughter and grandson of the excavator of Antiokia Church, who went to see their (grand)father and asked him to tell them about the site. He obliged and they shared his reminiscences with the other adults and children on the first of the three trips. Georgian archaeology’s frequent habit of children following in their parents’ footsteps means that this compelling and personal narrative approach could be replicated for some other sites.

The first field trip used unclaimed pottery from the Ethnographic Museum’s activity days. The second and third days used commercially made pottery. All were broken in the courtyard of the Georgian National Museum. For future events, it is hoped that the Ethnographic Museum could supply the pottery (as for the first day) to reduce the expense.

A possible weakness with the programme (although gratifying personally) is that I was singled out as the most interesting thing about the days. Whether this was because of my gender (as the only male leading the trip), or the fact that I appeared confident, exotic as a foreigner or for other reasons is unknown. Obviously, since we will be returning to the UK, others will need to be found to take our place in delivering these programmes. Several younger members of staff show great promise in this respect, but need to learn the confidence and public speaking skills necessary to keep the children engaged and enthusiastic.

A future suggestion has been made to the GNM: identify an excavation where children will be welcome to participate, where it will not matter hugely if they make mistakes whilst excavating. In our experience in Syria and Britain, the remains/foundations of buildings of the last two hundred years are an ideal next step for this. Should the old dig house at Armazi be demolished, its foundations could be covered up so that they could be used for this purpose. At the moment we are in talks with the Museum staff as to how to keep the momentum going and identifying possible projects and funding streams for future initiatives. 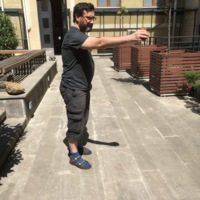 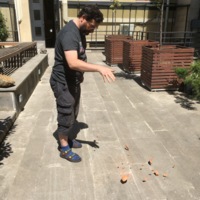 Having a smashing time! 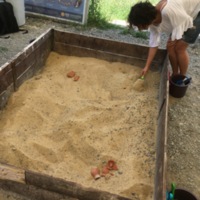 Preparing the cists for activities 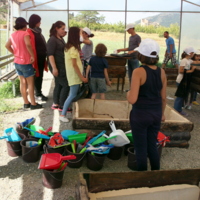 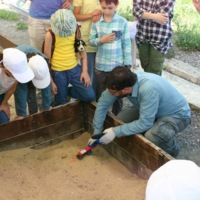 Showing the children how to excavate 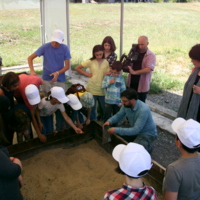 Explaining how to use a trowel 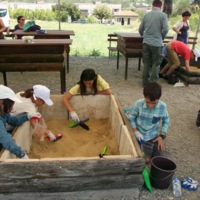 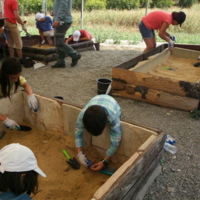 An archaeologist of the future 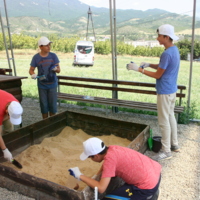 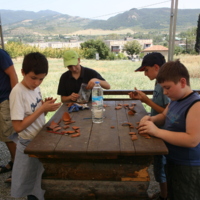 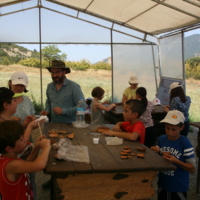 Struggling with a 3D jigsaw puzzle 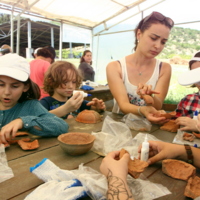 Conservators of the future... 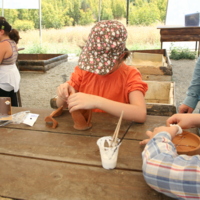 Concentration from one of the youngest participants 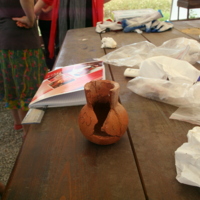 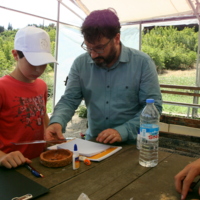 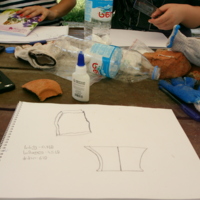 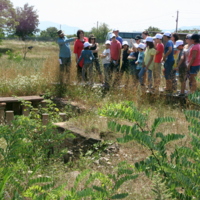 Learning about the Roman hypocaust system 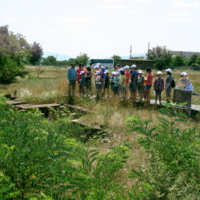 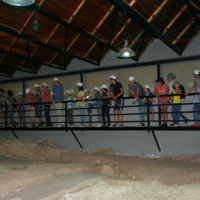 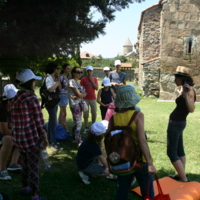 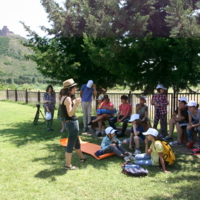 At Antiokia with the church of Jvari in the background 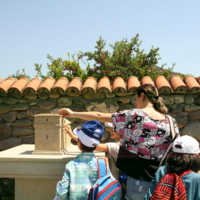 Learning from a model of Antiokia church 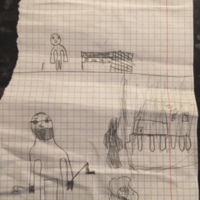 The most popular subject of the drawings: Peter! 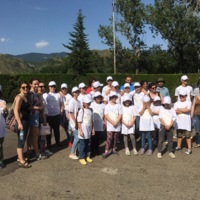