This photograph was taken in December 1992 and shows the point halfway along the "Street Called Straight" in Damascus (mentioned in Acts 9:11) where there is a definite bend in the road. 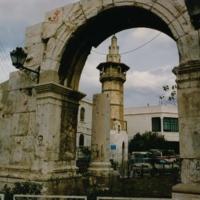