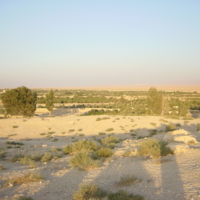 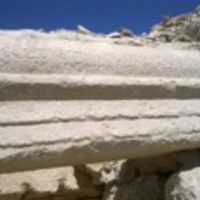 The tell in Qaryatayn was the centre of a middle bronze age kingdom, with the site being settled due to the presence of an oasis. The significance of the town declined over time although a garrison was permanently stationed in Qaryatayn in the Ottoman period in order to protect travellers from raids by the Bedouin as they travelled between Damascus and Palmyra. These pictures of the tell were taken by a local resident in May 2012 after the tell was bulldozed by unknown looters. Quickly taken on a telephone, the photographer returned the next morning with a camera but found the artefacts shown in these low resolution pictures had already been destroyed.