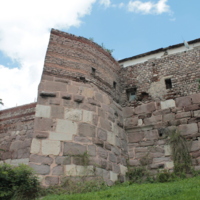 The very large defences of Ankara incorporate many architectural pieces (spolia) taken from the remains of the ancient city. Ancyra, as it was known in Roman times, was a very important city in central Anatolia and as a result was embellished with many fine and impressive buildings. In late antiquity, the city and empire became increasingly under threat and the Castle/Kale was built much to the same plan as we see today. The need to build the defences quickly and cheaply led to the looting of nearby buildings for their stone, hence the unusual mixture of stonework readily visible in the walls.